i picked this box up a few months ago at a show for $10. Cheap wax is just too good to pass up at shows!

This was Upper Decks first baseball release for the 1991 season. After the huge success of their 1990 "High Number" Series
that featured randomly inserted Non and Autographed "Heroes" cards of Reggie Jackson, they continued the same subset
in this release featuring Nolan Ryan in both signed, and unsigned copies of "Heroes" cards

The box was an OK time to open. i dont like how Upper Deck had the cards in a mish-mosh order in the packs. Cards upside down,
mixed with backwards, and correct leads to a frustrating pack ripping experience. 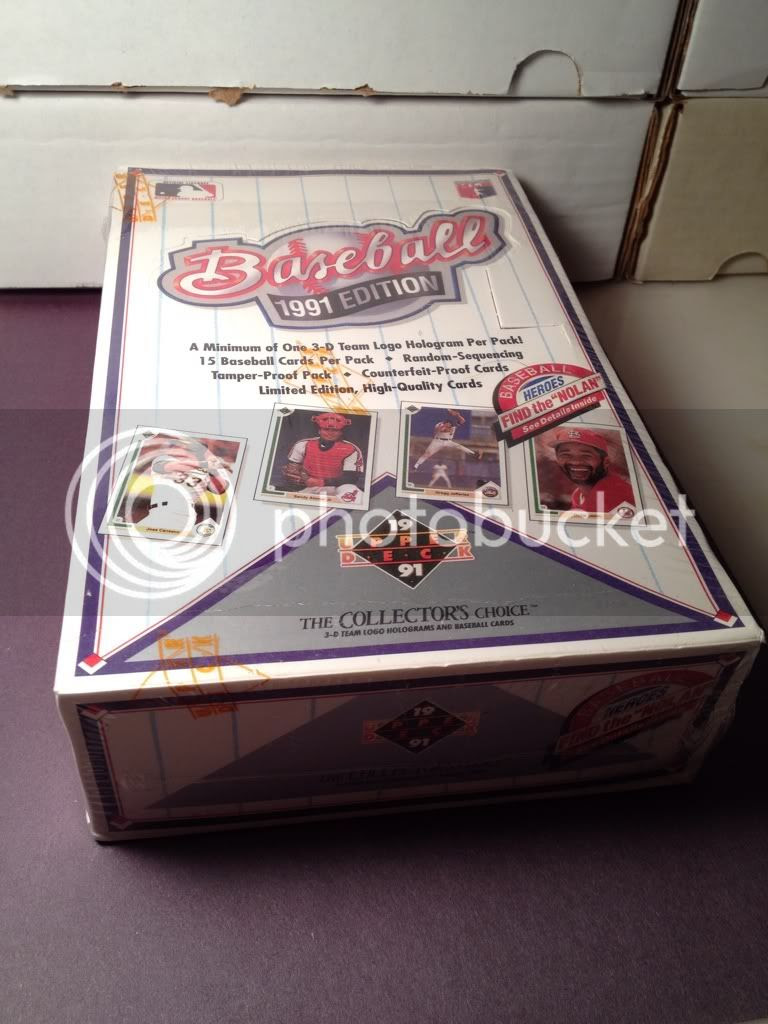 Here are some of the better cards that were in the box: 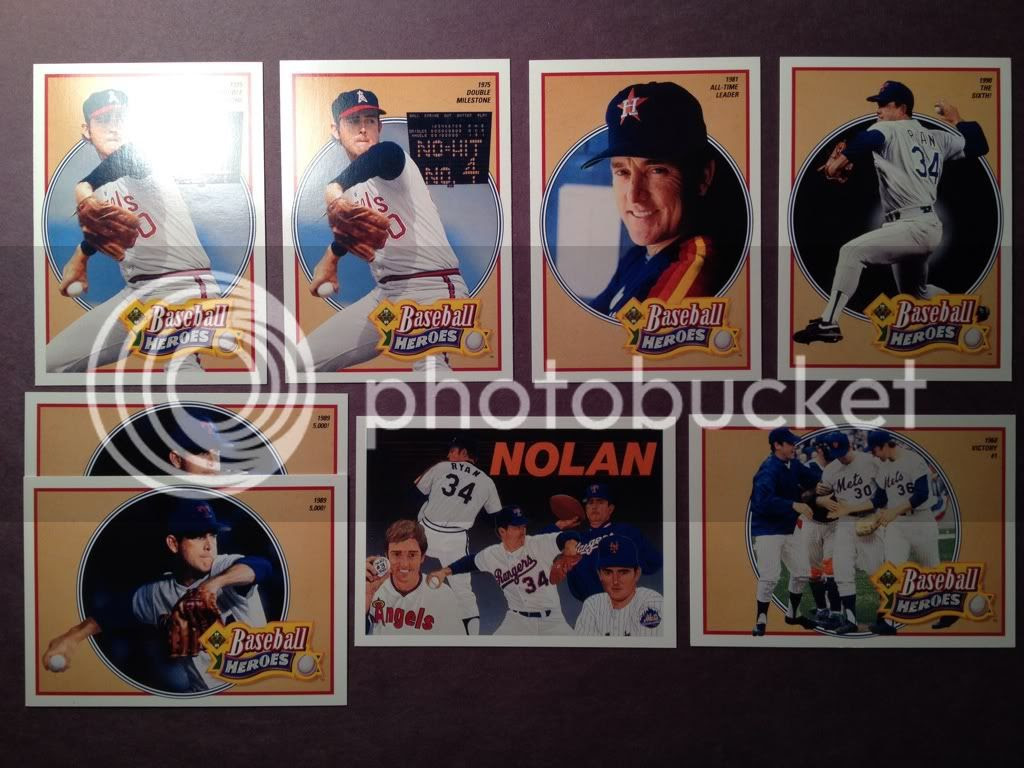 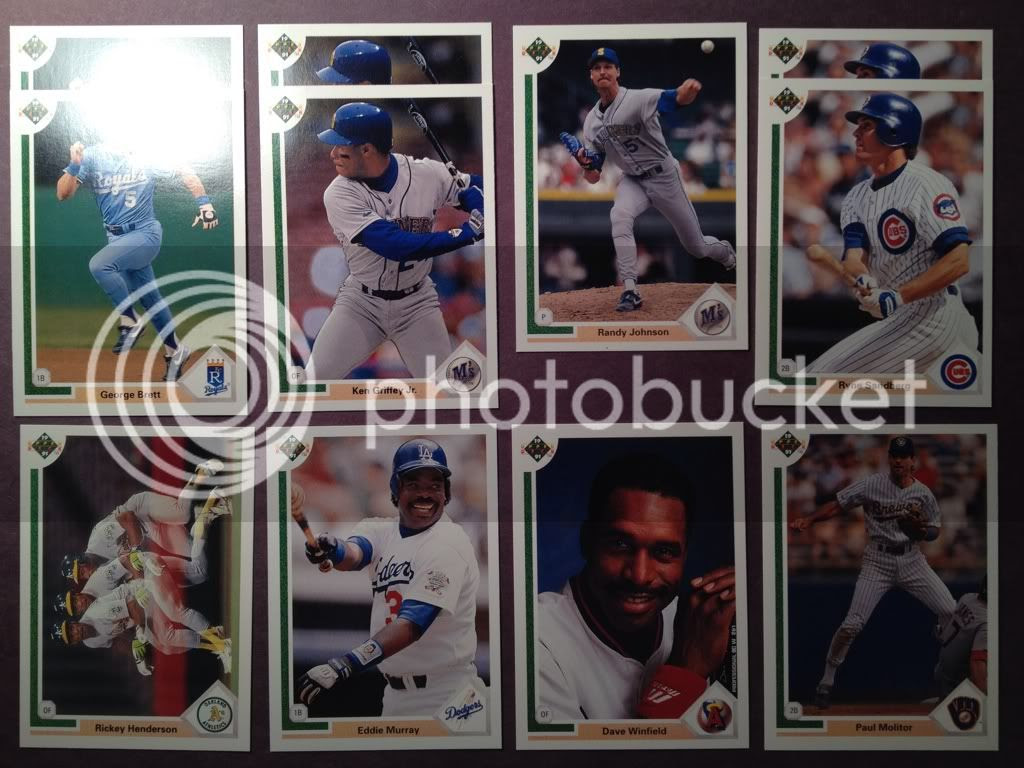 Thanks for the read,
Eric
ThoseBackPages
Posted by thosebackpages at 4:05 PM 2 comments:

Picked up this box from www.bbcexchange.com
Cost $19 for 12 packs of 40 cards. 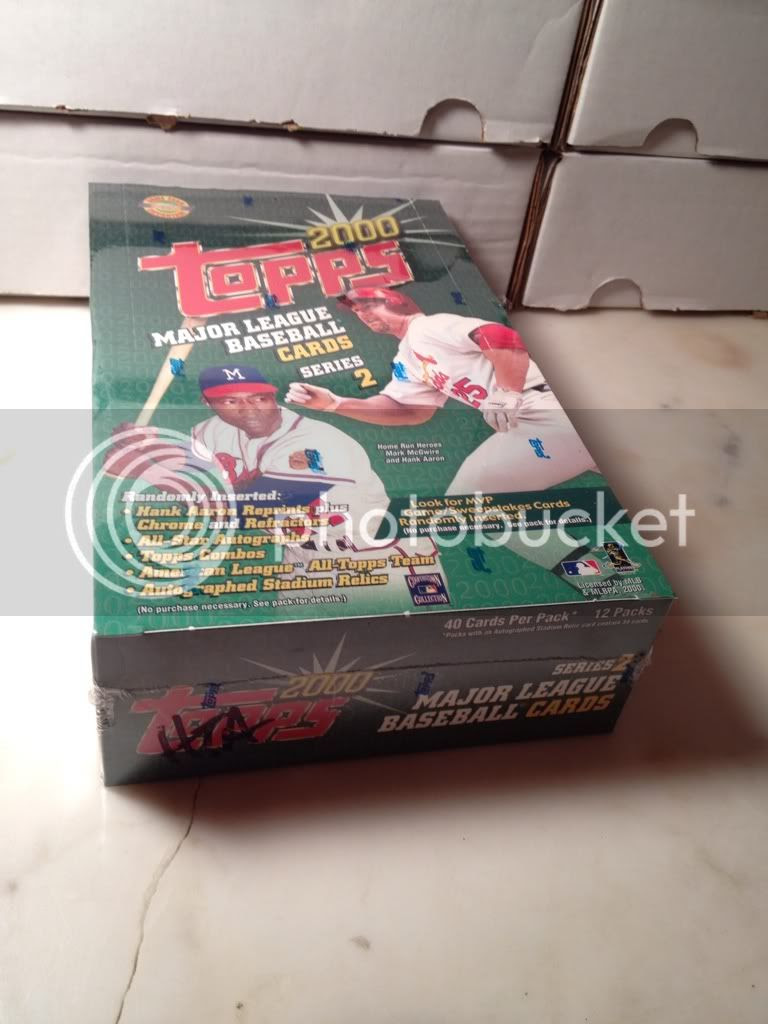 Came with a "Jumbo" box topper to boot! 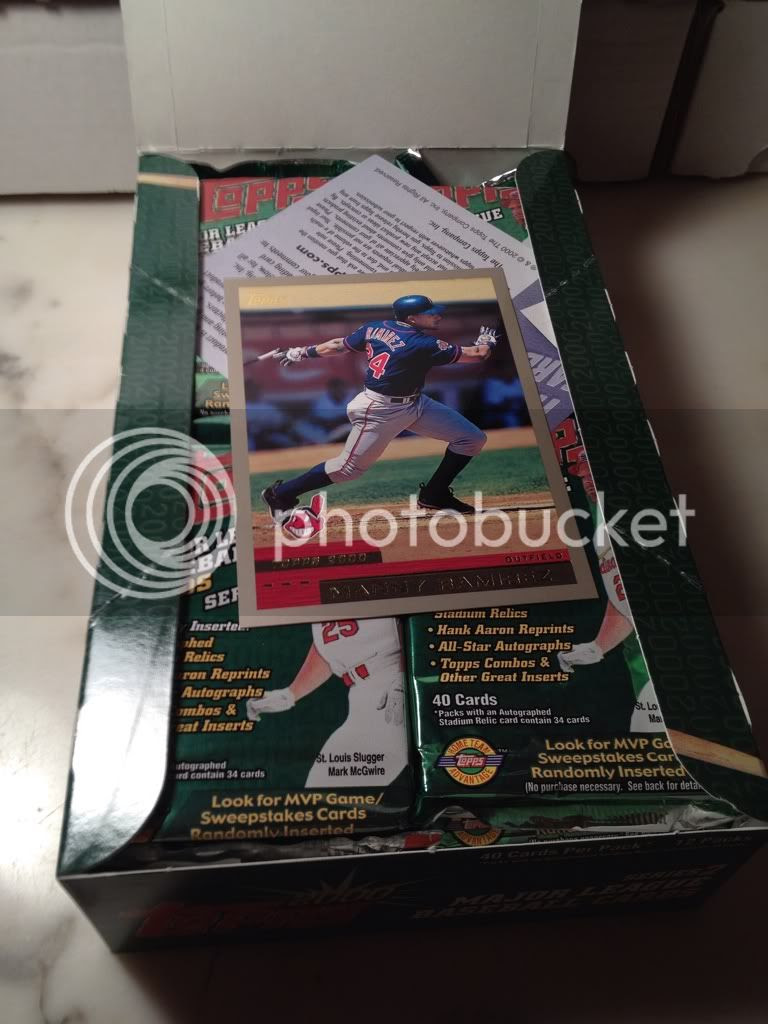 The packs suffered from some "stickage" for being enclosed for 12 years i suppose.

Here are the "hits" 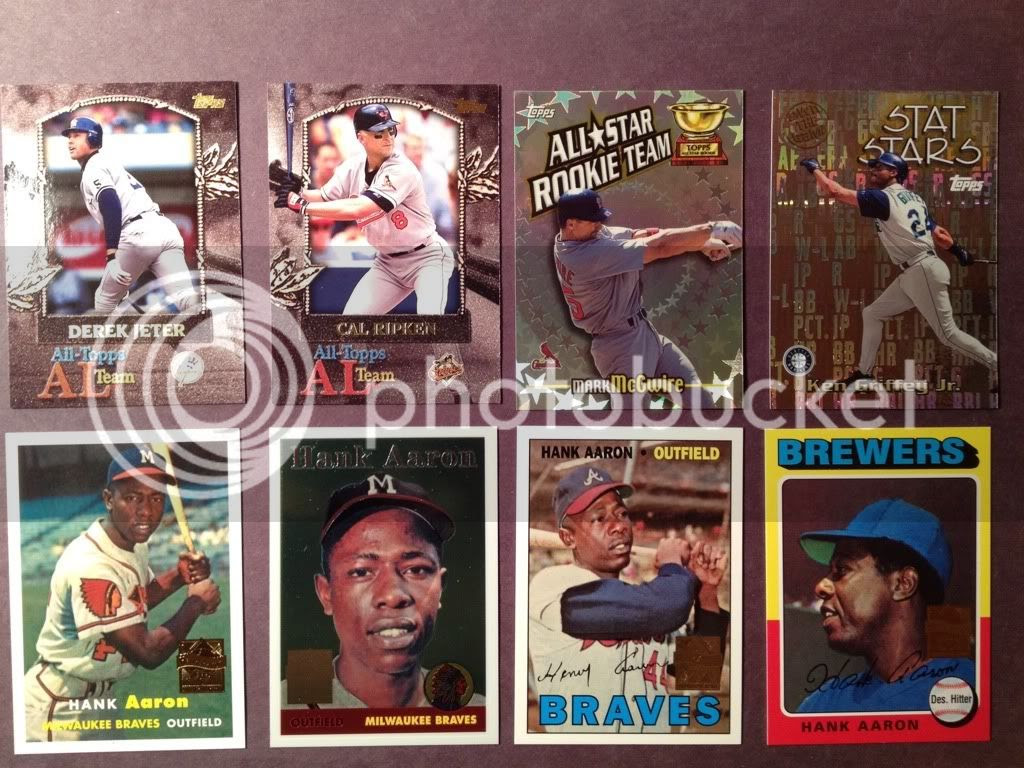 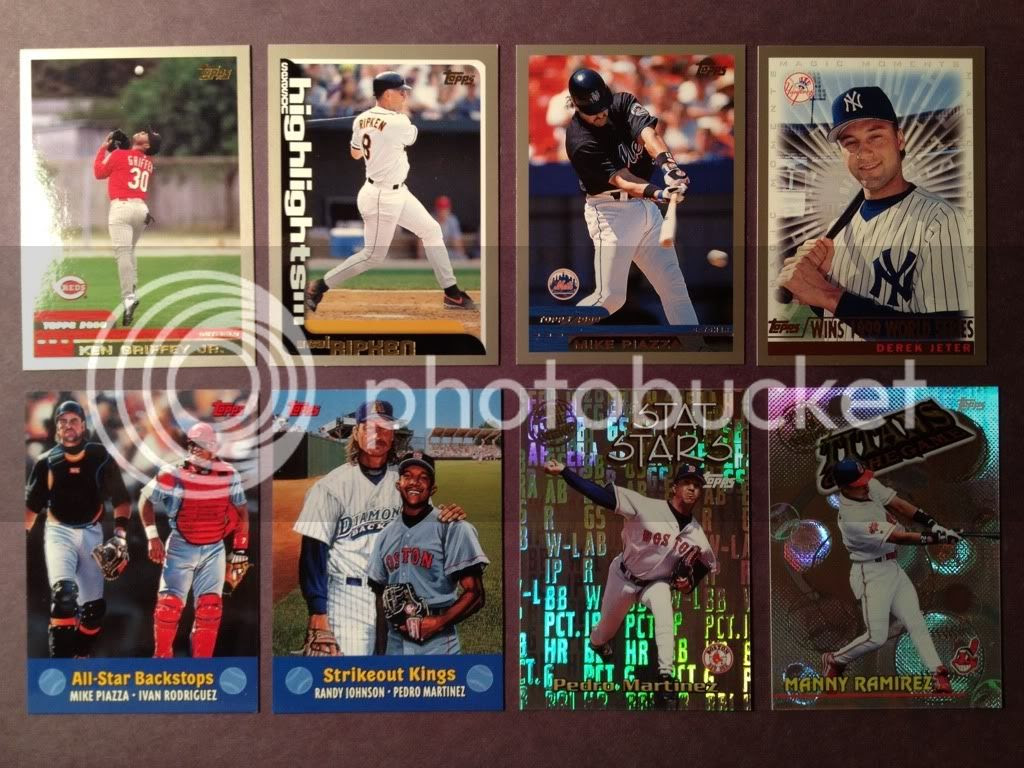 Overall it was an "OK" break. Perhaps do to a smaller(er) base set, there was a lot of repetition of names, and the pack sequence was also repetitive, cutting into the "fun factor" of ripping this box. But for $19, i cannot really complain.

Thanks for the read,
Eric
ThoseBackPages
Posted by thosebackpages at 4:41 PM 2 comments:

Is Derek Jeter the last ...

Yes, i am a Mets fan. No, unlike a lot of my friends, i do not hate the Yankees. When i was a kid, the Yankees sucked. It was that fairly small time when living in New York City meant Mets Baseball. Life was good.

But that's a story that ive told before, probably more then once.

When i was a little kid, a few things really stick out from that time period.

Elvis dying. My Mother and her best friend were huge fans, i remember how upset they were.

John Lennon Murdered. My Father is a huge Beatles fan, so therefore so am i.

Thurman Munson dying. im a Mets fan, but remember how sad people around me were when he died.

Thurman Munson started his Yankees Career in 1969, the year after Mickey Mantle hung 'em up. Mantle replaced Joe D, the lineage goes back through the Yankees History.

After Munson died, the Yankees were without a mega-home grown star until 1982 when Mattingly was given a cup of coffee.

Mattingly carried the torch from then until Derek Jeter took hold of it.

ive been a baseball fan since 1978. Yes i love the Mets, but i love Baseball.

Derek Jeter is a touch more then 3 years younger then i am. His best days are behind him on the diamond. Nothing wrong with that, we all get old.

But heres the thing, whos going to take the torch from him?

Some say Cano. But Cano turns 30 this year and has much to accomplish to be the next in the LONG line of home grown Yankee Greats. i dont think he can do it, to quote Yoda "He's too old"

for the last few years i was sold that Jesus Montero was going to be the one, the "savior" so to speak that would keep the lineage alive. Well, he was traded this winter. So no Jesus Saves will be occuring in the bronx.

Its strange to say it, but i think we're entering a time period that is not very familiar to anyone that has followed baseball for a long period of time. A time of the Yankees not having that home grown superstar.
Posted by thosebackpages at 6:52 PM No comments:

i decided to break away from what i normally rip. i wanted to open something cheap with long odds of possibly hitting a "hit" card. 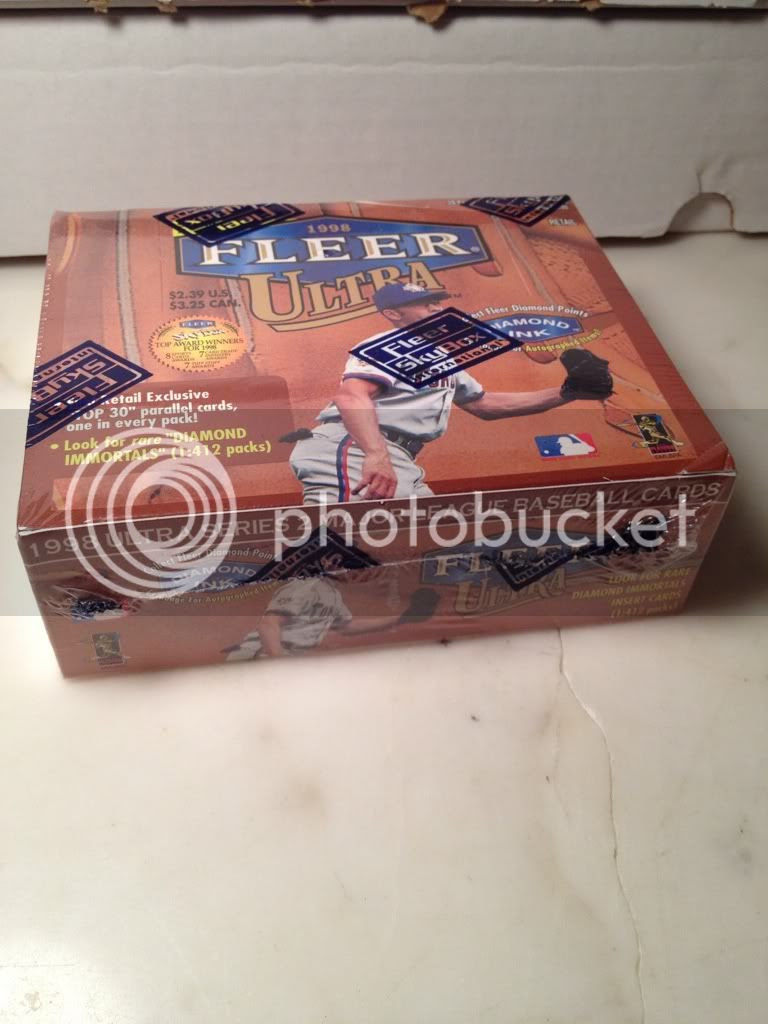 Inserts in Ultra Packs have been "one per" since back in 1993 i think it was. 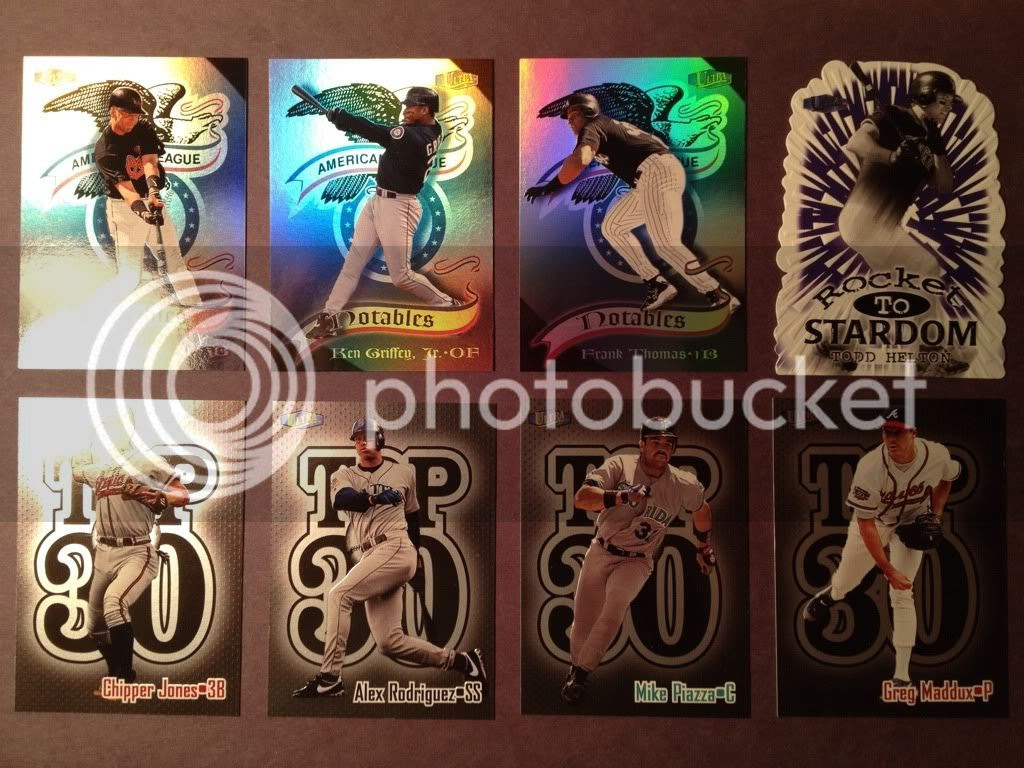 The "Top 30" Inserts are one per pack, a Retail exclusive

This box certainly did NOT disappoint... 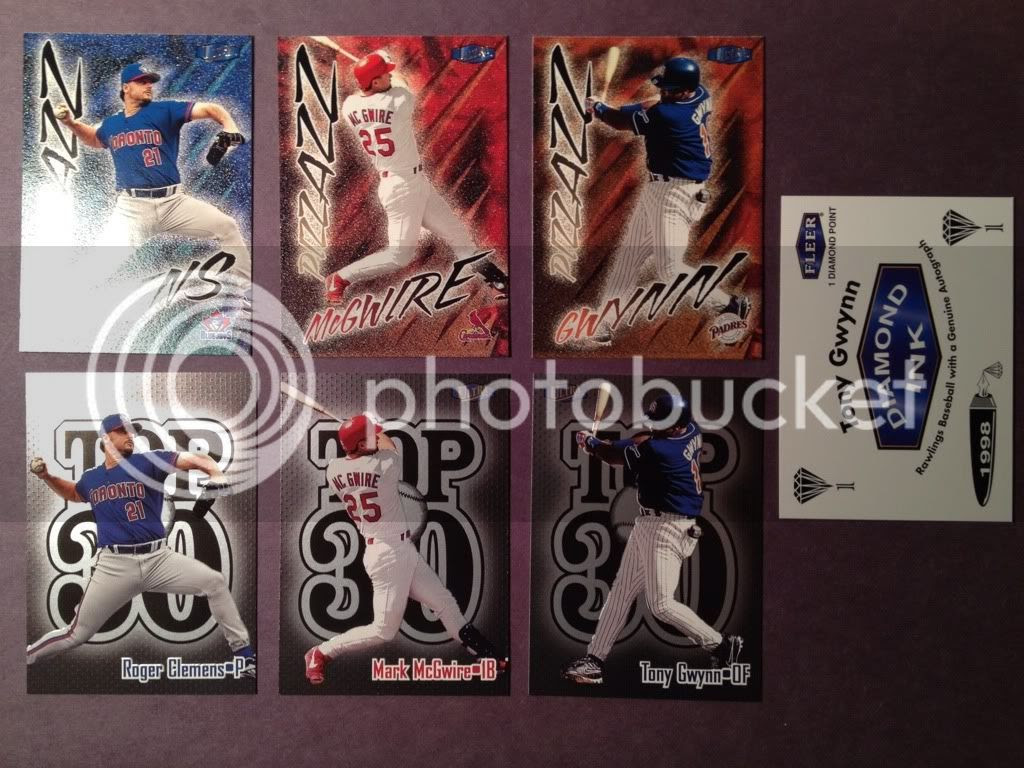 and of course, the base cards are shinny and glossy! 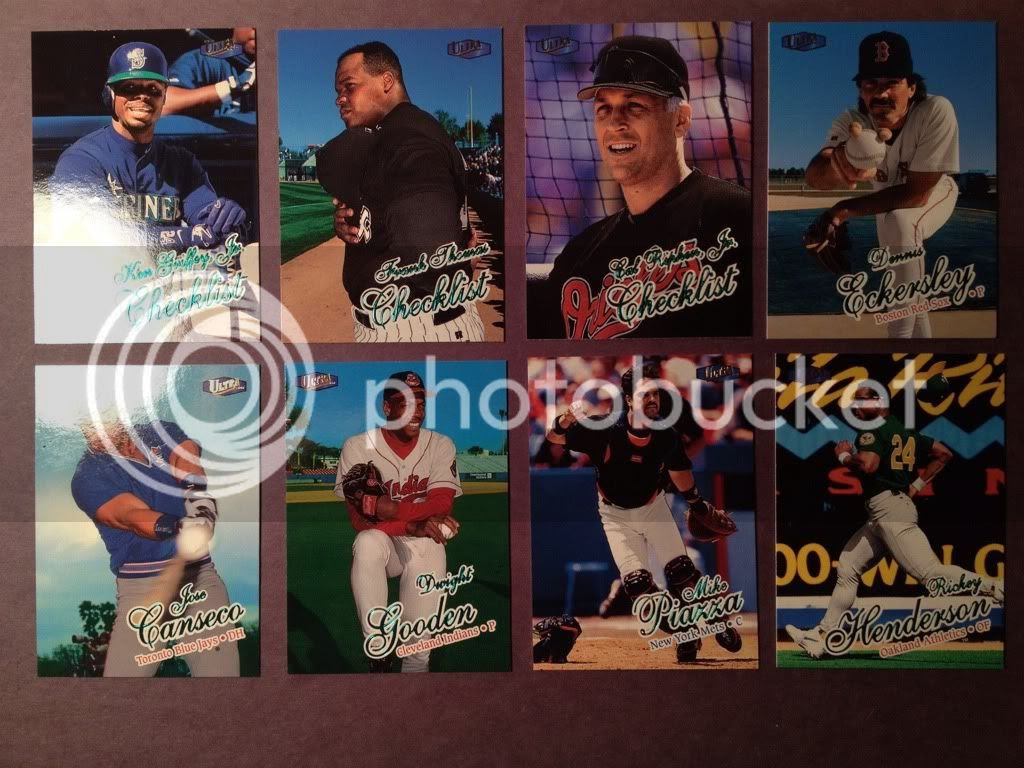 At just over 50 cents a pack, this was a really fun rip.

i cannot recommend this box enough. its very refreshing to rip something this old, have some nice looking cards, and have fun while doing so!

Thanks for the read,
Eric
ThoseBackPages
Posted by thosebackpages at 8:50 PM No comments:

Well, like any good addict, i had to get my 2012 Topps Flagship Fix On, now didnt i? lol 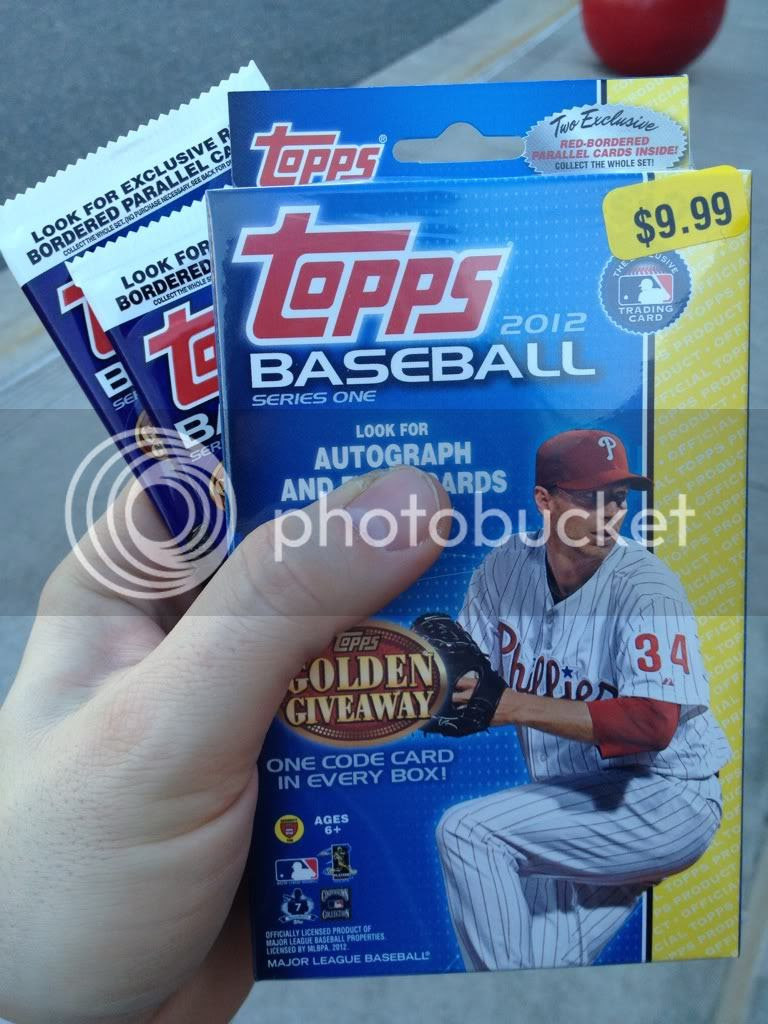 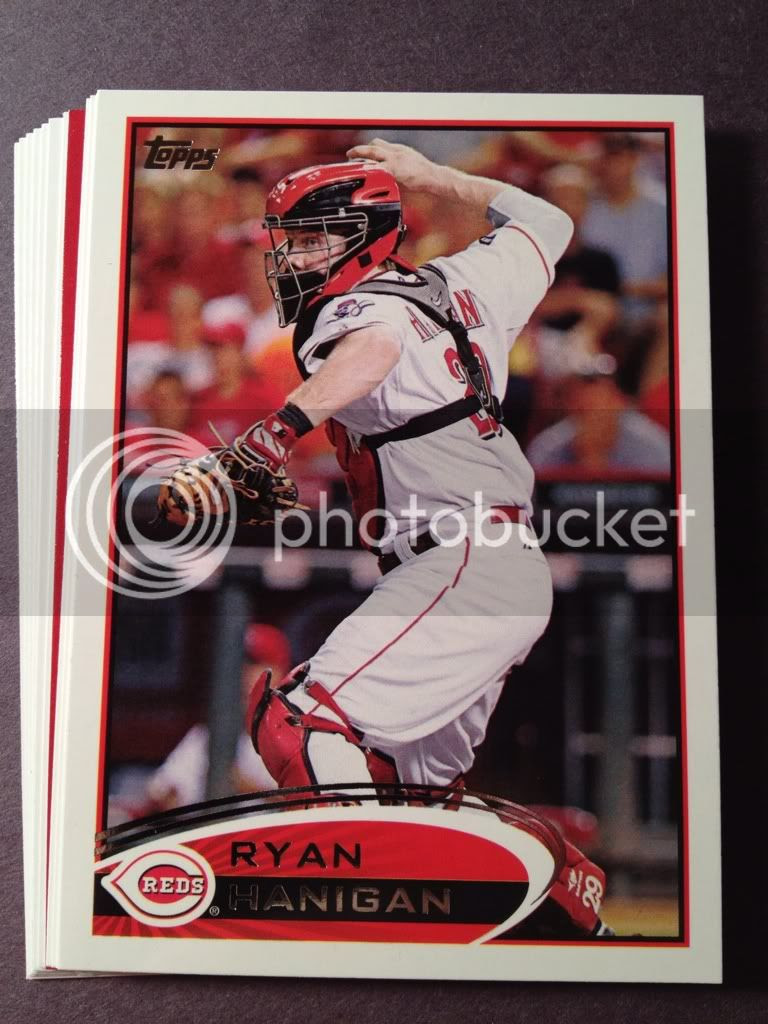 It was a small rip and i liked it. The card stock seems to be better then last years. The pictures also seem to be crisper. i didnt land any of the "cool" gimmick cards, but that isnt all that surprising for me, now is it? lol

Here are what they call "The Hits" 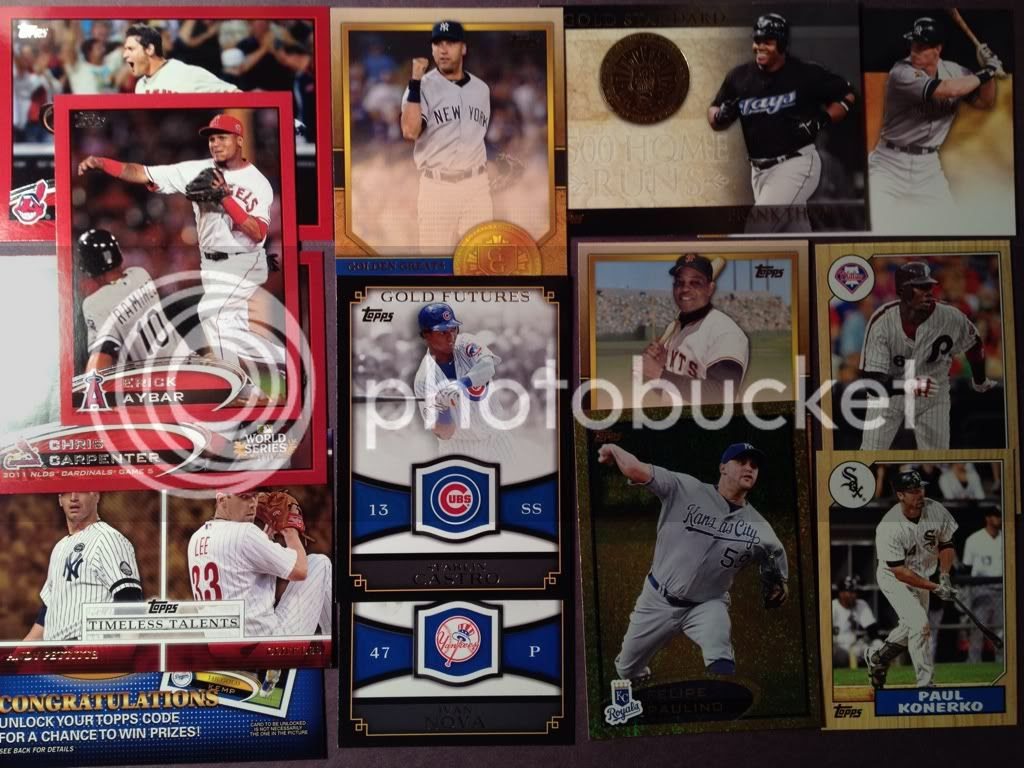 the '87 minis are cool. i really like the "Heritage" like card stock they used on the. also, hellova lotta yankees in there!

Thanks For The Read,
Eric
ThoseBackPages